I’ve been blogging since 2006 and while 99% of the time I love it, I have learned that there a few things I find incredibly irritating and painful to deal with.  Unfortunately, these are things that you as a blogger will also have to deal with.  These things will interrupt your plans, try to ruin your day, and often just make you really angry.

All of these things will happen and there isn’t a whole lot you can do to prevent them from occurring.  What you can do is understand and accept that they will occur, often at the worst times, and when they do, undertand how to deal with them. 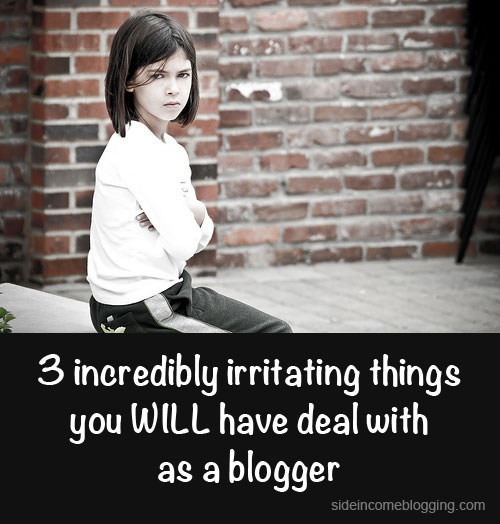 A troll will find you

I’m not really sure why and I doubt even the most educated of psychologists can explain the behavior, but eventually a troll will target your blog.  Perhaps they are jealous, angry, lonely, bored … who knows?

I was targeted by a blog troll about a year after I started my personal finance blog.  This person would disagree, in the most disrespectful way possible with pretty much everything I wrote about.  Why?  Just for the sake of disagreeing and stirring controversy.

My big mistake was responding.  Yes, I admit it, I fed the troll … for far too long.

Once I realized this person was intentionally trolling me, I started deleting the comments and blocking them.  Only to find another set of comments the next morning from the same troll, angry because I tried to block them and accusing me of censorship.

While it took me far too long to figure this out, the best strategy for dealing with the troll?  Ignore them.  Once I did this, a few weeks later the troll just disappeared.  Of course another just showed up a few weeks later, and another after that…

The good news is that if you get a troll, it’s a sign that your blog is doing well.  See, trolls like attention and only attack blogs and posts that get a decent amount of visibility.  When you finally get a troll (and you will), the bright side is that having a troll is a good sign you’re successful.  I know, sad, but true.

Tip: Ignore the troll and they will go away.  So very easy to say, but so very hard to do.  But trust me, it works.

Check out Rand Wilson’s recent video on this same subject.

Your site will go down – at the worst time

Not only will your site go down, it will go down on a critical day when you’re linked from some big website or blog.

I spent almost a week crafting a blog post I was planning to publish on Get Rich Slowly.  For those of you not familiar with the personal finance blogging space, Get Rich Slowly is one of the “big boys”.  I must have proofread that post 50 times, before I finally got the nerve to send it to JD Roth via email.   I didn’t expect to hear back from him, but it was worth a shot.

A week or so later, I received a reply letting me know that my article would be published.  I was thrilled!!  I immediately crafted up a “Welcome Get Rich Slowly Readers” post that I would publish at the same time my guest article went live.  The day came and my guest post went live (I was blogging anonymously at the time under the pen name glblguy , GLBL, or Gibble as Lynnae McCoy so named me).  I hit the publish button for my “Welcome” post and pulled up Sitemeter to start watching the big traffic rush.

Not 10 minutes later, I started seeing error messages: “DB Connection Error”.  Dreamhost, the terrible company I was hosting with at the time, had some big database issue that was impacting a very large number of their sites.  Something to do with their storage arrays.  Regardless, my site was down.

I opened a ticket with Dreamhost, only to be told that they were aware of the issue and working as quickly as they could.  8 hours later, my site came up.  But even then was up and down for a few hours after that.  I lost a significant amount of traffic and exposure.  I was livid, but there was really nothing I could do.

While this was certainly the worst outage I’ve ever had, I’ve definitely had others since.   I did end up moving to Media Temple, which has proven to have a much higher up time, but even they’ve had issues that caused my sites to be down.  The internet runs on computers, and we all know, computers aren’t perfect.

Ok, so Macs are really close to perfect, but I digress…

The bottom line is, your site will go down.  Sometimes in the middle of the night when it doesn’t matter, and other times at the absolute worst possible time.  Know that it will happen, be prepared for it and accept it.

Tip: The single most important thing you should be spending your money on is high quality hosting.  If your blog is down or slow, you are literally turning people away at the door.  Invest in high quality hosting upfront and know that it’s going to cost you, but in the long term it will save you.

Having your content stolen and republished on some lazy jerk’s site that is trying to make a quick buck is another sign that your blog has reached the “big time”.  On my personal finance blog my content was stolen almost weekly.  Unfortunately it’s recently started here on Side Income Blogging as well.

See, there are these lazy good for nothing jerks out there who like to set up websites that subscribe to your blog’s RSS feed.  These sites then republish your content on their blog (commonly called scrappers).

The big problem is, these lazy jerks often pay some SEO guru to get their site to rank high in search engines, so the scrapper ends up out ranking you for your own content and make money from it.  Fortunately for us, Google has recently done some things with the Panda updates and with authorship that really help this, but it still occurs. 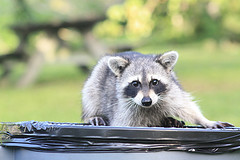 Let me tell ya, I go after these jerks like bees on honey, every single time.  I didn’t care how small their site is or how much of my time it takes – I am ruthless about it.  I work very hard to build up my blogs and work hard on my content. I am not going to allow some freeloading thief to get rich from my hard work.  Not gonna happen.

Oh, and a pet peeve of mine, and forgive me as this might seem a little harsh:

I see “bloggers” republish content from other bloggers every so often, claiming they were just trying to promote the author’s great article.  They’ll claim they didn’t mean to steal the content and thought it was ok since it was a blog.

Uh…sorry, but common sense should tell you this is wrong.  I mean, would you copy an article from your local paper, magazine, or from a media site like CNN and repost it?  No, of course not, because lawyers would be all over you and you may face copyright charges.  Someone’s blog is no different and I really don’t get how people would think they are.

For sites housed in foreign countries, much of the above won’t work and these jerks know it.  So they will ignore you.  The good news is that most of these jerks make money using Adsense.  If they ignore me and run Adsense, I hit them where it hurts.  I report them for Adsense Terms of Service violations.

You do this by visiting their site, finding an Adsense ad and clicking on the small arrow often in the bottom right hand corner.  Right now it says “Ad Choices”, but Google changes this sometimes.  That link will take you to a page where you can report the site for violating Google’s terms of service.  This works, as I’ve received a number of very angry and harsh emails from the scrappers because they’re Adsense account was banned.

Murphy’s Law states: “Anything that can go wrong, will go wrong“.

Yes, this applies to blogging as well.  Knowing this certainly doesn’t make you feel better when it happens, but it does help you plan for it.  Here’s just a few tips to help you mitigate your impact:

Photos by: flickrized, kewl, and [ jeremy ]

How about you?  What blogging related things irritate you?  What are your pet peeves?  Leave a comment!