Monday, October 13th, 2014 began like every other weekday, I awoke at 5am, made a fresh cup of coffee, grabbed my MacBook and checked my Adsense earnings for the weekend.

I immediately noticed that my Adsense earnings were down, and specifically on my main money making niche site. I suspected that maybe it had been down some over the weekend or maybe just a slow traffic weekend.   I pulled up Analytics, and saw that my traffic was WAY down as well.  What the heck? 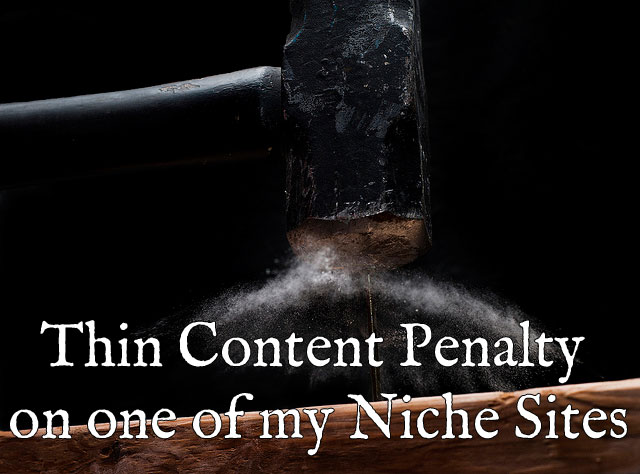 Next over to Webmaster tools just to see if there were any site errors or large numbers of 404s or something.  There was definitely something, and a something I expected.  As I logged in I saw the dreaded red letters, the ones indicating the site had a manual action.   Here’s the screenshot:

Needless to say, I flipped.  I immediately went and checked my other sites, which thankfully were fine.

This was my number one money earning site, and had considerably inflated my side income earnings over the past few months.  On this site alone, I was earning in excess of $1,200.00 a month starting in September, and the income was growing by $200.00 – $300.00 a month in prior months.

I had been reading on various websites and on social media that Google was swinging the hammer hard on Amazon based “review sites”.  Spencer and Perrin over at Niche Pursuits were hit hard along with a number of other “big names”.   Most of them, or so they thought, were negatively impacted by PBN (Private Blog Network) links, even though the penalty said “thin content penalty”.  Turns out, many of them were found using the PBN links, but the real penalty was thin content or only providing doorway pages, just like my site.

Many Amazon niche site builders received “thin content” penalties in September and October.  Many of them not only for one site but on all sites they had registered in Google Webmaster tools.  I did consider myself lucky in this regard as this was my only site penalized.

I’m guessing this particular niche site was targeted for a manual review because it was ranking on page 1 for at least 10 different search terms, and for the main money making term I was outranking Walmart and a few other big retailers.  Did they complain?  Who knows.  I did have a few PBN links I had just recently created, but all of mine were very well protected and private PBN links, so I doubt seriously Google found me that way, although certainly possible.

To be real honest, I was pretty surprised at the penalty.  My content was unique, and while not all of the reviews were hands on, I went to great lengths to research product information, and provide detailed and value ad content over and above what was available on Amazon alone.   Personally I wouldn’t consider 20+ pages of 750 – 1000 word reviews “thin content”, but Google didn’t ask me.

Google feels “middle-man” sites like mine that direct people over to Amazon don’t provide value.  Personally I disagree, and this is based on the fact that Amazon was in the #2 position on page 1 for my main money making term, above me, yet people would click on my site instead.  That says something, but like I said, Google didn’t ask me, and they own the internet, so we have to play by their rules.

Thinking that having all the reviews on the main page and not focusing enough on the information content led me to think that maybe that is why I was penalized.   So I immediately revised the home page and site layout to focus more on the informational content and less on the reviews.    I submitted a reconsideration request and was quickly denied.

Oh well, I was done.

The manual review was far less than I thought

I had heard from multiple sources, that all manual site reviews were done from Google’s Mountain View corporate office.   While I certainly can’t verify it, two days before the penalty was assessed, I received two hits from mountain view using Linux (Google employees run Google’s own internal version of Linux).   I did some history searching, and found no other hits to the site from Mountain View at all … ever.

This led me to realize that review was conducted on Friday, October 10th.   Now, here’s where things get interesting.  I did a little more data mining, and found that those two visits hit the main URL only.  There were not other hits to other pages at all.  None.  Wow…

Basically, the manual review consisted of a Google employee hitting my main URL twice, both for very short periods of time, and not clicking on any of my review articles, yet assessing a penalty.

My guess?   I was penalized for using a Partial Match Domain (PMD).  The domain was my primary target keywords, followed by “hq”.

I also looked to see if the site was looked at again after I submitted the reconsideration request: Nope, not at all.  It was denied without any further visits.

Impact of the penalty

The penalty caused the site to be pretty much de-ranked for everything, and really quickly too.   Here’s a screen shot of my traffic from Analytics:

Here’s a screen shot from ProRankTracker showing that all of my main terms fell below the 100 position.  This is as of 10/17.  You can see in the Month column what my rankings were before the penalty. 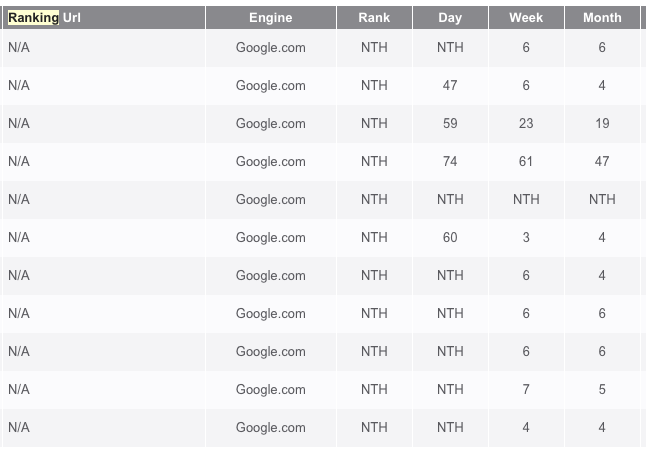 I let the site sit for a week or two, and then set the robots.txt file to deny the Google Bot in order to get the site de-indexed.  I considered selling it, just deleting it, and also just moving the same content up under another domain.  What I didn’t do was sit around wondering who moved my blogging cheese.  I focused on my other sites, and continued to make progress on those while deciding what to do with this.

A good reminder that while you can’t control the internet and what happens to your sites all the time, you can control you reaction.   I’ll be honest, I was livid.  Having $1200.00 a month taken from you all the sudden hurts and this wast the first time Google has done this to me.  But I channeled that energy and put it into other projects and websites.   That’s just what you have to do in this business, keep plowing forward.

In the end I decided to just move the site as is to a new and not previously used domain.  I didn’t use a PMD at all, and instead used a brandable domain name that gave me some flexibility to branch out and discuss more general and related topics.  This will allow me to build out more informational content and keep the information article to review ratio more around 2:1 or 3:1.

I set the site up in Webmaster tools under a completely different Google account as well.   As of today, the site is being indexed, is starting to rank again AND the best part?  I started earning money from it again this month.  Granted, not much, but it gives me hope.

As always, I’ll keep you posted on how things are going.