January 2014 was a busy month for me both from a full-time perspective and from a side-income perspective.   As I’ve mentioned before, all of my web based work, including my services business is done part time.   I have a full-time job that I’ve been in for a number of years, which serves as my main income source.   In January, my full-time job kept me far more busy than normal kept me from spending the time I normally spend on my side-income work. 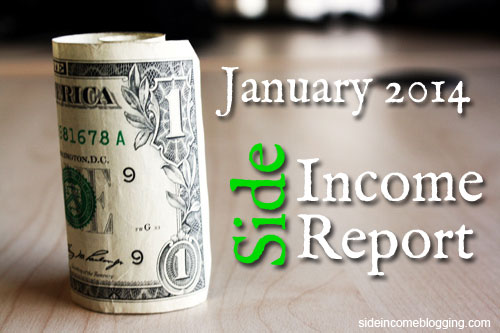 Regardless, even from a side income perspective I was busy working with 5 different clients, writing articles for my various blogs, and publishing new reviews on my niche sites.  I also started the process of revising my introduction to blogging series previously named “Start a Money Making blog”.  This included renaming the series to How to start a blog, and refreshing and revising all of the content, which I am still working on.

Probably one of the larger distractions and time consumers for me in January was changing hosting companies from MediaTemple to A Small Orange.  The process wasn’t hard, especially since I used BackupBuddy, but it was just tedious and a bit stressful trying to minimize my downtown and making sure I didn’t mess anything up.

From an income perspective, January wasn’t bad, but it didn’t meet my $1000.00/month stretch goal I’ve set for 2014 either.   I’ll be working on that.   I have stumbled across a services niche that I think could be very profitable.  I’m not ready to share it yet, but will keep you posted.

Here is my income breakdown for January 2014:

A few notes about the above numbers: