I just finished updating my income and expenses spreadsheet for September.  September continued my current trend of exceeding prior months income, and September is currently the best month I’ve had with Amazon, and the best month I think I’ve ever had online in general. 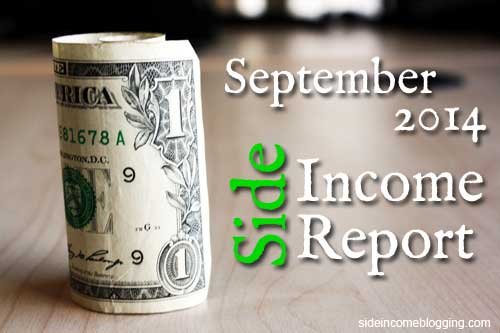 During September I saw in overall increase in revenue of $926.00 over August.  That’s a huge increase.  The majority of this income was from Amazon’s affiliate program, with Adsense coming in second.   I also began using the MyLikes platform to add some additional revenue as well.

The majority of this income is from 3 of my 5 websites and associated social media pages.  These 3 sites including one product based niche site, one informational niche site, and a lifestyle website I run called Blue Ridge Mountain Life.  Traffic to the two niche sites is all organic, with very little link building, and no paid ads.   Traffic to Blue Ridge Mountain Life is primarily from the 30k plus Likes Facebook page, although organic search traffic is beginning to increase as I’m starting to rank of a few target search terms.

The other 2 sites are earning very little revenue at this point, but are both less than a year old too.  I’ve found that it takes a good year or more to begin earning anything reasonable, and this is especially true with Google’s new sandbox.

The big news here in the past few weeks has been around Google penalizing public PBN networks and the sites that received links from these networks.   Public PBNS like Rank Hero, Lightning Rank and a few others got hit hard in September.  Google de-indexed their networks, and penalized any sites that had links from those network.  Additionally, and while I cannot completely confirm this, it looks like Google also penalized any other websites in the same WMT (Webmaster tools) account.   Google swung the hammer hard this time, and many of those people that were ranking high on the SERPs and earning big bucks, were impacted.  Even Spencer Haws was hit hard, and has vowed he is done with PBNs.

One of these strange things about this whole thing is that someone people using PBNs for link building were labeled “black hats” by both Google and my Rand Fishkin of Moz.  Personally I think that’s a bit harsh.  Black hat is generally considering hacking.  I would argue use of PBNS as more gray hat SEO, but of course they didn’t ask me.  A number of other people felt the same as this whole black hat discussion was pretty big on Twitter.

Was I impacted?  Nope, not at all.   Frankly, I was hoping to see some rankings increases as a result of the penalizing efforts.  I know for a fact a number of competing sites ranking ahead of me are using PBNs.   I haven’t seen any rankings increases yet, but I think it’s just a matter of time.

When PBNs, especially public one’s where you bought links, were all the rage, I declined.  First off I just couldn’t justify the money, and second I’m in this for the long haul, and I knew, without a doubt, that these PBNs were a short term strategy.   I knew that it would be easy for Google to detect these links, and knew it was a matter of time before they were reindexed and the sites that use them penalized.   Honestly this whole Google smack down took longer than I expected.

I’ve been pretty public on my stance that using public PBNs was not a good idea.  The real irony here is that I was called “stupid”, “clueless”, and a number of other names.  I was also told by many of the people using these networks that “you have to ride the wave while it lasts and earn what you can, when it goes away, find another wave to ride”.

Did some of these people make big bucks in the short term?  Yes, absolutely.  Are many of these same people now crying, whining and complaining because they were penalized?  Yep, they sure are.  Are these same people hating Google and calling foul?  Yep, you bet.  They knew Google wouldn’t approve and they knew it was just a matter of time.

If you play with fire, you will get burnt.  I personally will not sacrifice long term profit for short term gain.   Slow and steady wins the race every single time in my book, and my earnings are proof of that.

Private PBNs, on the other hand, if done correctly, are working very well for people right now.  Will the people that do this get caught?  Some will, some won’t.  It all really boils down to how traceable the sites are, and how smart people are with them.  Frankly, I doubt PBNs are even much on Google’s radar anymore.  Google typically hits very hard and very publicly, scare the heck of out everyone, and then move on.  I think that is exactly what they’ve done with PBNs.

The bottom line is that links still matter, and are the single most important aspect of getting ranked and ranking well in Google.   Anyone who disputes this isn’t living in the real world.   There are many ways to get links, and private PBNs are just one tool in the arsenal.

Most of my focus in September has been on my Blue Ridge Mountain Life site.  Why?  Fall and fall leaf color.    I worked really hard to write up a few keyword focused and highly valuable articles that focused on Fall an Fall leaf color.   This was done to drive traffic from both search engines and social media, as there is a very high interest in fall colors this time of year.  The effort paid off, as I saw almost double the Adsense income in September.

I also spent time marketing my Side Income Blogging Maintenance service, and working with a few clients to get that going.  The remainder of my time was spent on standard things like getting content written and published, emails out to my mailing lists, maintaining my Facebook pages, and a number of other miscellaneous activity.

The one extra item I have been spending a great deal of time on during the latter half of September is learning how to write iPhone games.  I have two great game ideas that I am going to work on, and hopefully will go live with in the next 6 months.  I’l keep you posted.

On with the real numbers!

How was your month?  Have an income report you publish?  Share it below in the comments.