My December 2013 and Year End Summary is long overdue, but better late than never!  I’ve been busy switching my hosting company from MediaTemple to a blog hosting company called “A Small Orange“.  You can read about some of my early issues, but things have been very smooth for the past 2 weeks, and service along with performance have been great.  So far, I’m very satisfied with the move. 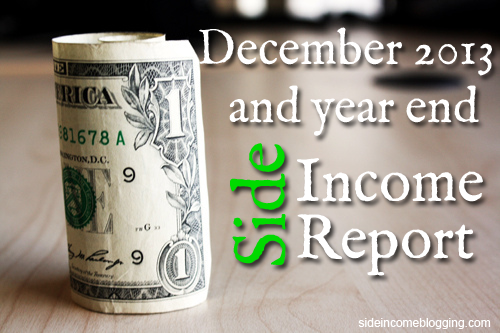 But, back to the my December Side Income Report!

December was actually a really good month for me both in Side Income Services work and for income from my various websites.  The income numbers below represent combined income from all of my sites and my services work as well.

Here is my income breakdown for December 2013:

A few notes about the above numbers:

My only expense for December 2013 was hosting at $100.00.   This cost will be reduced starting in January since I switched hosting to A Small Orange, as their pricing the for an almost equivalent plan is $50.00/month.

2013 was the largest income year I’ve had, again, since 2009 when I sold Gather Little by Little.