I’ve received a number of queries from readers asking about my Side Income Reports since I hadn’t published one since March.   In hindsight, I should have communicated this, but there really weren’t any big changes to report from March – July.  In fact, my traffic and income dropped off a bit.   I just didn’t want to bore you with the basically the same numbers over and over again each month.

BUT – August broke that trend and was a big month for Side Income Blogging and I’m really excited to share my August numbers with you! 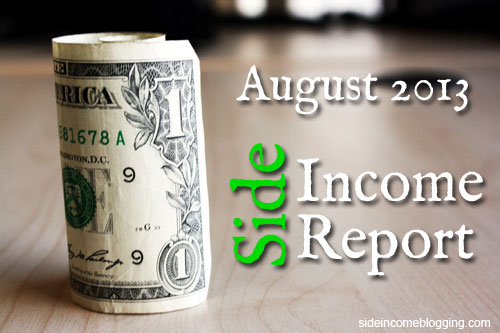 To be real honest, I’m not really sure exactly what to attribute the growth too, but I won’t complain.   I have been focusing more on search traffic, and as a result search engine traffic grew from 2,643 visits to 4,683!  An increase of more than 77%.  I know my recent focus on search engine traffic didn’t caused this level of growth.   It would seem that Google started ranking my site higher for a number of search terms, resulting in the large traffic increase.  I don’t track my search term rankings, so this is just speculation.

Could this be related to my Google+ participation?  Hmmmm…

Follower counts on Google+ and Pinterest increased.  I haven’t been spending as much time on Pinterest, so the growth was minimal.  Google+ growth was normal.

Visitors from Google+ increased substantially for August going from 189 in July to 829 for August.  A 339% increase!  This was mainly due to the success on Google+ of a few articles I published in August:

Mailing list growth is something I would really like to see grow more than it is.  Definitely something I want to work on, but search engine traffic is still going to be my primary focus going forward.

Here is my overall income breakdown for August:

A really good income month, but again primarily due to my services work.  Income growth for August was good, but I won’t actually see the money until September and October, so I expect those months to show much higher Adsense and Affiliate program incomes.

Definitely a good month, but again due primarily to my services work.  I’d really like to see the more passive income sources like Adsense and Affiliate offers to grow.

How did your sites do in August?