In June of this year (2013), I decided to diversify my niche site inventory by creating two review sites.   My existing niche sites were all information based, and intended to serve as authority sites for a niche topic.   My friend, and niche site expert, Jason Hill was having some great success with review sites, and his success encouraged me to give them a try.

I’m a firm believer in always testing new things: changing colors, changing layouts, fonts, image placement, etc.  I wasn’t happy with my early conversion rate on my sites after the first two months.  I was getting reasonable search traffic, but the visitors just weren’t buying.   After a lightbulb moment caused by my wife, I made some pretty big changes to both of my sites.  The result?  An increase of more than 15% in my conversion rates! 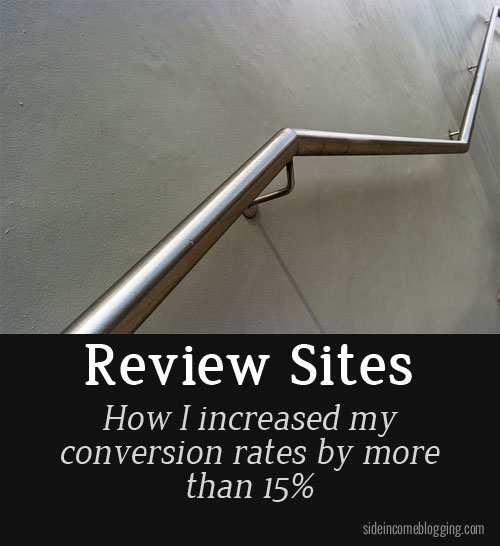 Review sites are specialized niche sites that focus on providing reviews of products consumers are looking to buy.   Review sites are a great way to provide value to web searchers and earn money using affiliate programs that pay you as a the website owner each time someone buys one of the products you’ve reviewed.

I built my first two review sites in June of this year.  I chose products that:

After doing lots of research and brainstorming on ideas, I chose my two product niches: blood pressure monitors and electric toothbrushes.   My blood pressure monitor review site was created out of a recent need I had.   I have border line high blood pressure and after purchasing a horrible unit at my local drugstore was personally searching for an accurate electronic blood pressure monitor online that I could use at home.   The sites competing in that space were pretty bad, and didn’t contain a lot of detail, so I set out to create a better site.

The electric toothbrush site was one where I was curious about electric toothbrushes and considering purchasing one, but more importantly I felt the number of sites competing were lacking in quality, and search volume for the primary keywords was high.  Competition in the niche was higher than I would normally tackle, but I wanted to try a site in a more competitive niche and see if I could rank over time.

I spent a week or two writing up reviews and posting them on the sites.  I also did some social media promotion of the reviews on Google+.  Then I waited as Google began indexing the site, and backlinks began building.  I started getting my first sales in July, but only a couple.   I made an effort to write at least 1-2 additional reviews each week.

The electric toothbrush review site hasn’t done as well as I had hoped, and struggles to rank and convert.  But, this niche is a bit more competitive, and I’m hopeful that if I continue to write reviews and “stay the course”, that I’ll eventually begin to rank well.

The blood pressure monitor site has been the exact opposite.   I’m really excited about how well this site is doing.  In August I began to see that the blood pressure monitor site could turn out to be very profitable.  The site continues to rank higher and higher for my target keywords, and many other long tail keywords.   In August, only two months after starting the site, I earned in excess of $50.  September earned even more, and October is already three times September!

But let me share a little change I made in late September, that significantly increased my conversion rate and is a big pat of the earnings increase …

How I improved my review site conversion rate by 15%

The conversion rate for my two new review sites in August and September were about 3-5%.   Not horrible, but not near as high as I wanted.   I made a few changes early in August that included putting a big red call to action button at the bottom of the article that said “Buy Now on Amazon”.  That helped a little, but the big change came at the end of September.

I was having a casual conversation with my wife one evening about the review sites and Amazon in general.  She said “You know why I like Amazon?   They put all of the really important information at the top along with a buy button.   Other sites have too much detail.   With Amazon, I can see a summary, and scroll down further if I want the detail, but I don’t have to“.

A light bulb appeared above my head.   I had been wanting to implement Product and Review schema.org on the sites anyway, so I decided to make some changes:

Here’s a screen shot of the completed changes I made to my Blood Pressure Monitor site: 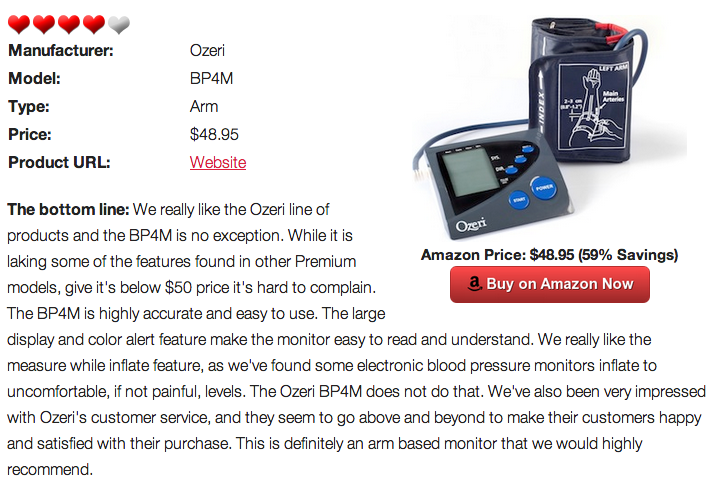 These simple changes to the top of my reviews increased my conversion rates from a small 3-5% to more than 15%.  Currently, I’m seeing an 18% conversion rate but I want to track this for a bit to make sure that the numbers are accurate.  Needless to say I’m very pleased with the results.

Some of you at this point are probably saying that all of the changes I made seem a bit complex, technical and tedious.  You’re right they are.  I ended up building a WordPress and Genesis plugin that added a new WordPress content type called “Review” and even adds a special editor to the “Review Edit” page that prompts me for all of the information, and uses a template to display it.   I’m testing the plugin on both of my review sites currently.

I’m working on getting this plugin to a point where I can share it with you at a very low cost.  Right now it works, but it’s not as flexible as I think most people will need it to be.  Once I get that resolved, I’ll make it available.

Let me know if you implement any of the changes I made and how it impacted your conversion rate.   Would love to see it have positive results for you!