As you may recall, in January I became fed up with Media Temple and decided to switch hosting companies.   After talking to various friends and getting some feedback on Google+, I decided to move one of my sites to A Small Orange.   My initial experience was a little bumpy, but after a week or so, I saw that their performance and support were outstanding, so I moved the remainder of my sites over. 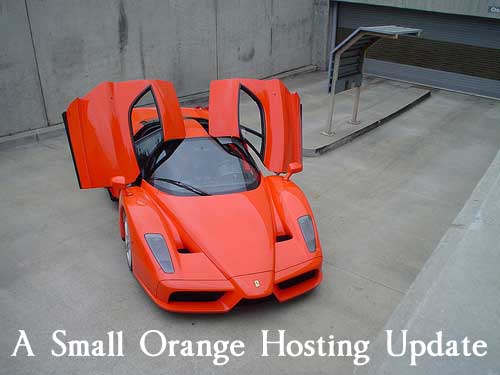 A Small Orange hosting as of April

Since then, things have for the most part gone very well, and to be honest I really haven’t even thought about hosting much at all.  Prior to moving to A Small Orange (ASO), I was constantly logging into the Media Temple management interface to figure out why I was over my virtual memory limits, to reboot my VPS because it was slow, to open a ticket, etc, etc.   I’ve literally been in the ASO management interface maybe twice since migrating my sites over.  The great part about this is that I get to use all of that previously wasted time focusing more on content and my other projects.

While I would love to say things are 100% perfect, they haven’t been.   A few weeks go, ASO had some scheduled maintenance one evening, and when I awoke the next morning my sites were all down.  After working with their support team, I found out that somehow, instead of restarting my VPS server, they rebuilt it. All of my websites were deleted.  Their most current backup was 2-3 weeks old, which they did restore for me, but I lost 3 weeks of content.  In particular, a very long article I spent a large amount of time on.   Needless to say, I wasn’t happy at all.  I was ready to start looking for another hosting company again, but my first priority was getting my sites current again as quickly as possible.

BackupBuddy to the rescue.

After losing about 2 weeks worth of content on my very first blog back in 2007, I learned the hard way to always have a current set of backups.  I actually keep 30 days worth on Amazon S3.  I took the leap a couple of years ago and purchased BackupBuddy and installed it on all of my sites.   While I seldom ever have have to think out BackupBuddy (it automatically backs up all my sites each night), it has really saved me a few times.  This particular incident more so than ever.   I literally had all 5 of my hosted sites current and up and running within 2 hours.  *whew*!  Seriously, if you haven’t invested in BackupBuddy (affiliate link) yet, I cannot encourage you enough to do so.  Next to hosting, it’s the best investment I’ve made in my websites.

After my sites were up, I escalated the issue to an ASO support manager, who very quickly followed up with me to let me know they were looking at what happened, and she was sincerely apologetic.  Later that day, I received another follow-up email from her basically saying that a human error had occurred, and that both the Tech that made the error and her were very sorry, and that the Tech felt horrible.   As a result, they offered me credit for hosting and gave me free backup software, which is normally an additional monthly fee.  Hard to be mad at a company that owns up to their mistake, and offers to make amends to compensate me for my time and income lost.  I mean, we’re human, we all make mistakes.

I’m still on ASO, and continue to be very happy with their service.   Overall, A Small Orange is very reliable, and my sites run faster than they ever have.  Best part?   I’m running at less than 10% server utilization, where on MediaTemple I was consistently running at over 90%.  Even better??  ASO is half the price each month!

Give A Small Orange a try

So if you’re looking for a new hosting company, I’d really suggest giving them a try.  They have a 90 money back guarantee.  Just move one site over for a month or two and see how you like them.  I think you’ll be pleasantly surprised.

For me, what makes a hosting company good, isn’t necessarily the issues they have (assuming of course they aren’t frequent), but it’s more about how much the company backs their product and supports their customers.   Issues happen, I get that, but stand behind your product and provide top notch support, and I’ll be a customer for a long time.   I left MediaTemple not because of the issues, but because of their support – I got tired to receiving canned replies basically saying “Hey, you’re on your own”.

Remember, I only recommend products I personally use.  All of my sites are running right now on ASO, including this one, which currently has a 1.37 second load time on Pingdom.   1.3 seconds, I think that’s the fastest this site has ever been.